Nora said, “I want a baby doll that looks like Owen so he knows I love him and I can hold him.”

I hugged her and bit back tears, “You are so kind…he knows you love him. Someday he’ll say it to you too but, trust me, he knows that you love him. He loves you too.”

She giggled and went back to playing. For her it was simply speaking aloud a thought and nothing more. For me it confirmed my fear that she worries about him loving her. How exactly do you explain this to a six year old? How do you delve into the complexities and nuances of love in its many troubled forms? My conclusion in the past was, you don’t. Keep it simple and let her draw her own conclusions but that was before we had Owen. Before I faced the fact that hiding from a subject doesn’t end a child’s curiosity. They don’t stop thinking about a topic just because you change the subject. They just go ask someone else or draw their own conclusions.

“Hands are for holding, hugging, helping, and not hurting.” The refrain we’ve used for years. The lesson we revisited when friends were too rough. Now she has a brother who she loves but he hits, rarely holds her hand, and hugs are a contact sport. He loves her but doesn’t show it like other kids. She’s noticing his other-ness.

I brought her home a new baby doll in hopes it would look enough like the one in the catalog she showed me. I worried it was a shoddy substitute. What I didn’t expect was that Owen would take a sudden interest but the doll had a stroller. A stroller has wheels. 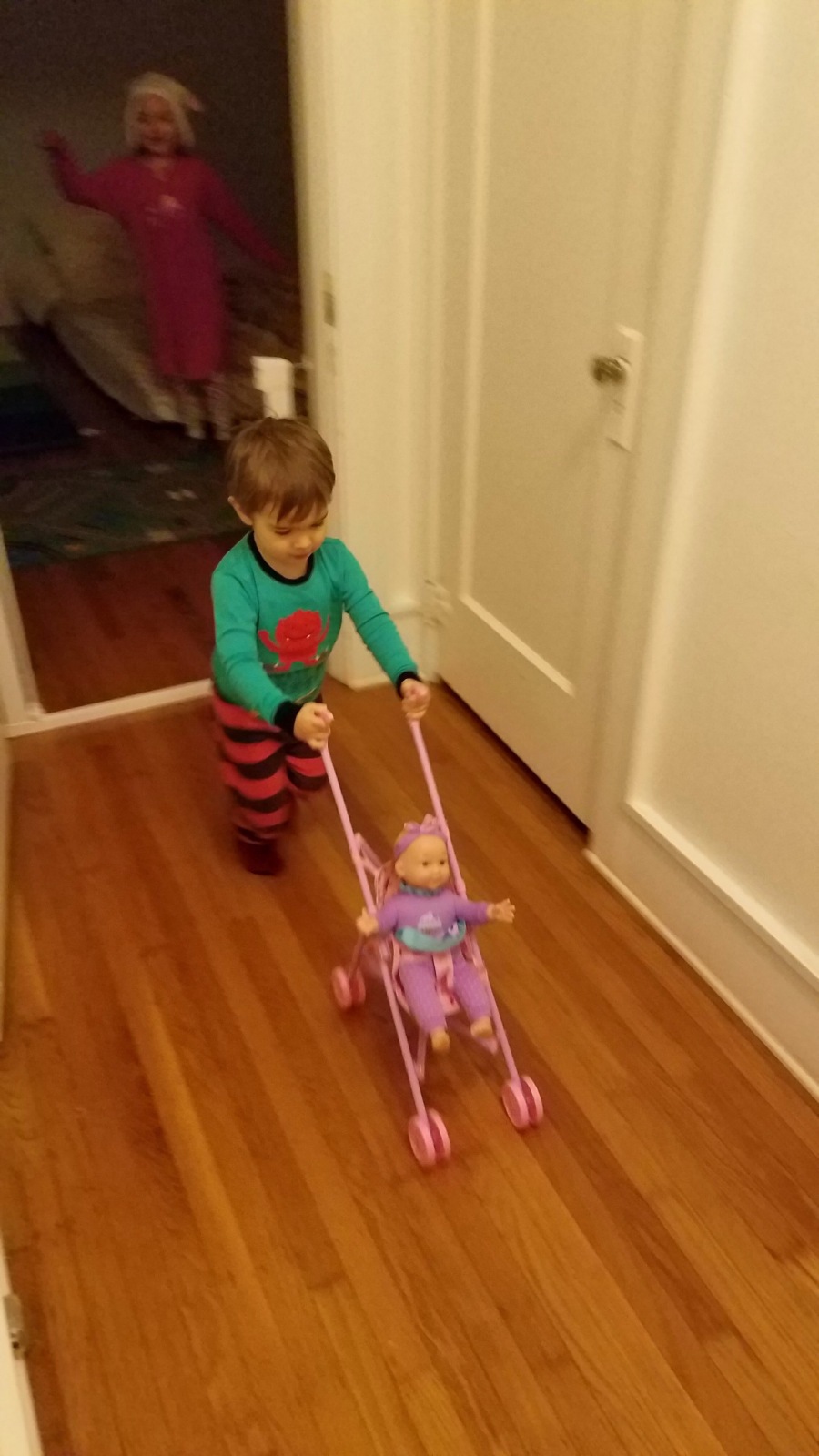 I’ve never seen a real baby get pushed so fast in a stroller without it making it onto the news. The game was afoot and he was not to be separated from that stroller. In his mind, the game required that THIS particular doll had to to be in the stroller while he sprinted around the house riding the flimsy purple and pink stroller like a chariot.

Nora did her best at first to see the humor, then tried to keep Owen from hurting the doll or himself, then lost her patience. This was her toy after all. She tried giving him a different doll but he had already associated that particular doll with the stroller. No dice.

The ensuing melee was punctuated with grunting, screaming, and flinging of dolls and accessories. I took the doll and stroller away, Nora stormed off, and Owen went down for an early nap under protest. Once the dust settled, I tried to talk to Nora, and I asked her, “Can we take turns with the baby doll?”

She was right. I was wanting her to take turns with her toys for our sakes to avoid his meltdowns but what about the message it sends? What about her feelings? Which is more important? I took a deep breath and hoped I wasn’t screwing up too badly by leveling with her.

“Nora, do you remember me saying Owen thinks differently than other three year olds?”

“Sometimes we ask you to do things to help us with him and it’s not fair. I’m sorry.”

“It doesn’t bother you?”

“No…I just wait for him to nap and I hide my toys.”