It’s the small moments of letting go that are the closest I come to feeling like maybe I have this mom-thing figured out for once.

It’s the moment when Owen climbs into bed and blankets my head with his body and I chuckle in rare, surrendered delight instead of annoyance at being awoken yet again throughout the night. Pulling his little knees in tight against me as he presses his face into my neck as close as possible. Hearing him breath in my scent with a soft reverent sigh as he farts on me. I slide my hand under his bottom so if he leaks I’ll sense it right away even in my sleep-deprived haze and save the sheets from having to be changed yet again.

It’s the moment he leans his forehead against my own in his miniature caveman version of a kiss. It’s when he smiles and says, “F’wank you.” It’s his reassuring pats on Nora’s back when she’s upset or hurt.

I watch them play together at the moments when they think I’m not watching. They tickle and cuddle each other, mimic each other, and amuse one another. It warms my heart and eases my worry, they have each other. For all of their fighting and tears, they love one another and successfully share a 10×10 room the majority of the time without bloodshed.

Nora came home from school today and mentioned that another little girl doesn’t want to be friends with her anymore. “She said I’m not her best friend anymore and that she doesn’t want to play with me.” I told her I was sorry and asked how she felt about that. She sighed deeply, “I can play by myself again.” It broke my heart to see her so sad and to think that she was being alienated. I tried not to project my own school experiences onto her or the situation and sought for something that might cheer her up.

She perked up and we started listing off names of classmates and old playgroup friends. We hugged and she laughed as Owen came over to squeeze in next to her. I pointed out, “You’ll always have Owen,” she laughed as he growled and tried to sit on top of her.

It hasn’t been easy for Nora to adjust to sharing us and her home with this little intruder. It hasn’t been easy for any of us at times. A second child in the house, being a mom of two kids under five, wasn’t what I thought it would be. I finally felt like I had it together as a mom and thought I could handle another one; except one kid started to feel like four and the two of them felt like ten.

I think back to just after his birth and asking desperately of other mothers, “Does it get easier?” I would have an infant and a toddler screeching at me in simultaneous stereo hysterics at least once a day, find myself screaming and/or crying in response at least once a day, and found myself battling postpartum depression yet again. The response was an unconvincing “yeah” and then finally an honest response, “Nope, just different.”

Then I saw a quote from the late, great Joan Rivers that gave me some relief. 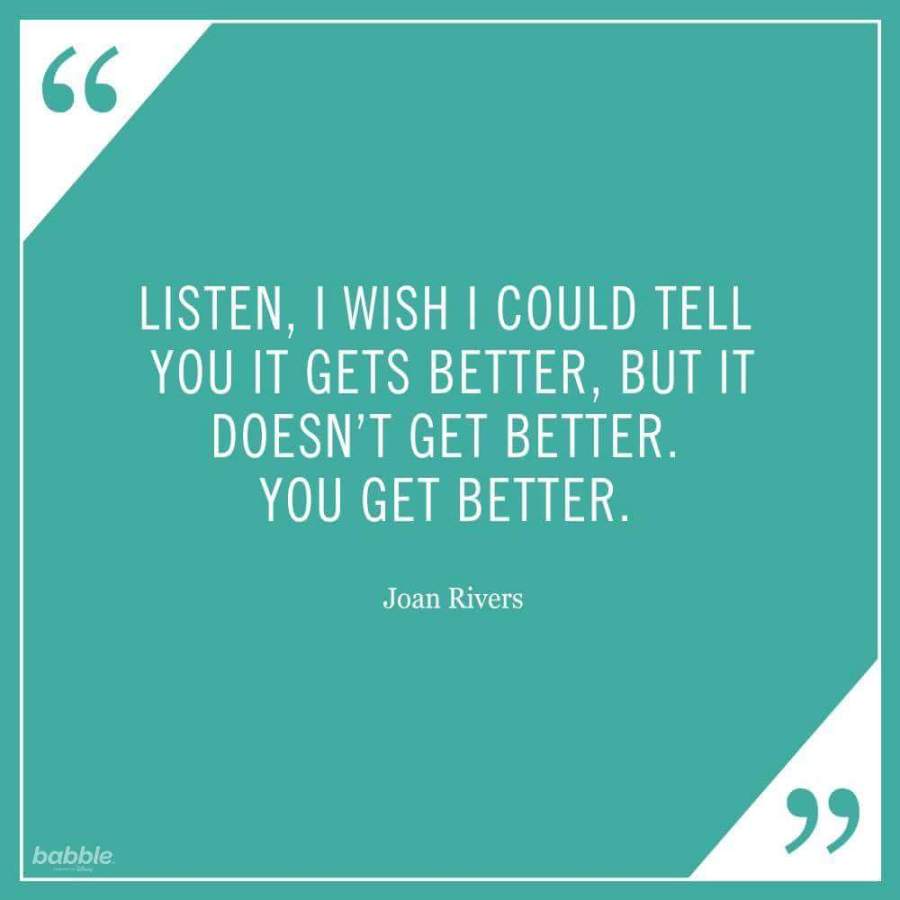 It’s different for sure and I keep trying to be better. Most days I’m happy with not being in tears, avoiding other people’s secretions, and averting bloodshed but the point is I try. Maybe that’s a sign of a mom doing an ok job, we keep trying.