“Don’t worry, mama. I got it.” She shimmied forward in her chair towards her large, stemmed water glass refusing my help in pushing in her chair.

I bit my tongue and watched her swell with pride in her big kid abilities as she drank with complete focus. The day had been a success but like most days that you fantasize and plan for as a parent, reality didn’t quite match.

Earlier that morning, Nora watched through the rain streaked window on the train in silence. Excited to be on the train heading downtown but I think the lure of an Owen-free adventure to anywhere was appealing. I understood too well and agreed in silence as I squeezed her around her shoulders towards me.

I knew my mother would have loved to come as well but I wanted this moment to myself with Nora. Just like she did for me as a girl. It was a vague memory but I remembered her delight and excitement at the time of taking me to tea. I wondered what memories Nora would take from this day. What memories will last for her of me, of her childhood, someday.

We neared a park and I pointed out the coming cherry blossoms and the view. She commented on the birds and the rain. I reassured her that we would be ok to walk in the rain since we had coats. She asked if we were going to the Children’s Museum, again. I explained, again, we were going to the Portland Art Museum to see art. She smiled, didn’t respond when I asked what she thought of that, and looked out the window. She asked again if this was our stop. We had five stops to go.

The train deposited us near the university and I pointed out that her dad had attended the school. She thought that was silly and then asked to see his classroom. We were laughing and discussing this as we passed my old condominium. An old neighbor spotted me and wanted to chat. He tried to get Nora to talk to him but she picked up on his creepiness. She said, “Bye now.” I didn’t blame her. We wished him farewell and headed on.

I pointed out the museum ahead and she asked if there was a playground. I distracted her by pointing out a worm.

She said we needed to save him so “he wouldn’t get squished” and I responded he was an “urban worm” and liked living in the park. She gave me a funny look and we moved on.

We entered the museum and she immediately claimed to be too tired to take the stairs.

They allowed us to use the ancient elevator that we were told was old as the building. I believed the docent, it felt that way when she closed us in behind the accordion metal door. Nora wanted to immediately ride back down again and she was mad when I said we had so much more to see and needed to get off.

She pulled on my hand, “This museum is making me cold on the inside… it’s driving me crazy!… My body needs to sit down… I need my coat off – ooh, what’s over there?!” She ran towards the marble stairs and elicited my instant mom anxiety. I coaxed her to a bench and let her snack on a contraband applesauce pouch.

The sign for the Native American Art caught her attention. We strolled past the artifacts and photographs. I mentioned that people still lived in some of the places pictured. That these were real people and souvenirs of many lives. She stood silently, holding my hand, staring at a leather gown and the many beads and stones that were stitched to it along it’s length. I thought of my grandmother and her stories of our Native American ancestry and wondered how much of it was true. I wondered if Nora would have any interest in hearing about it someday. I asked her as much and she asked for a snack.

Ten minutes later we were in the gift shop buying a bunny wallet. 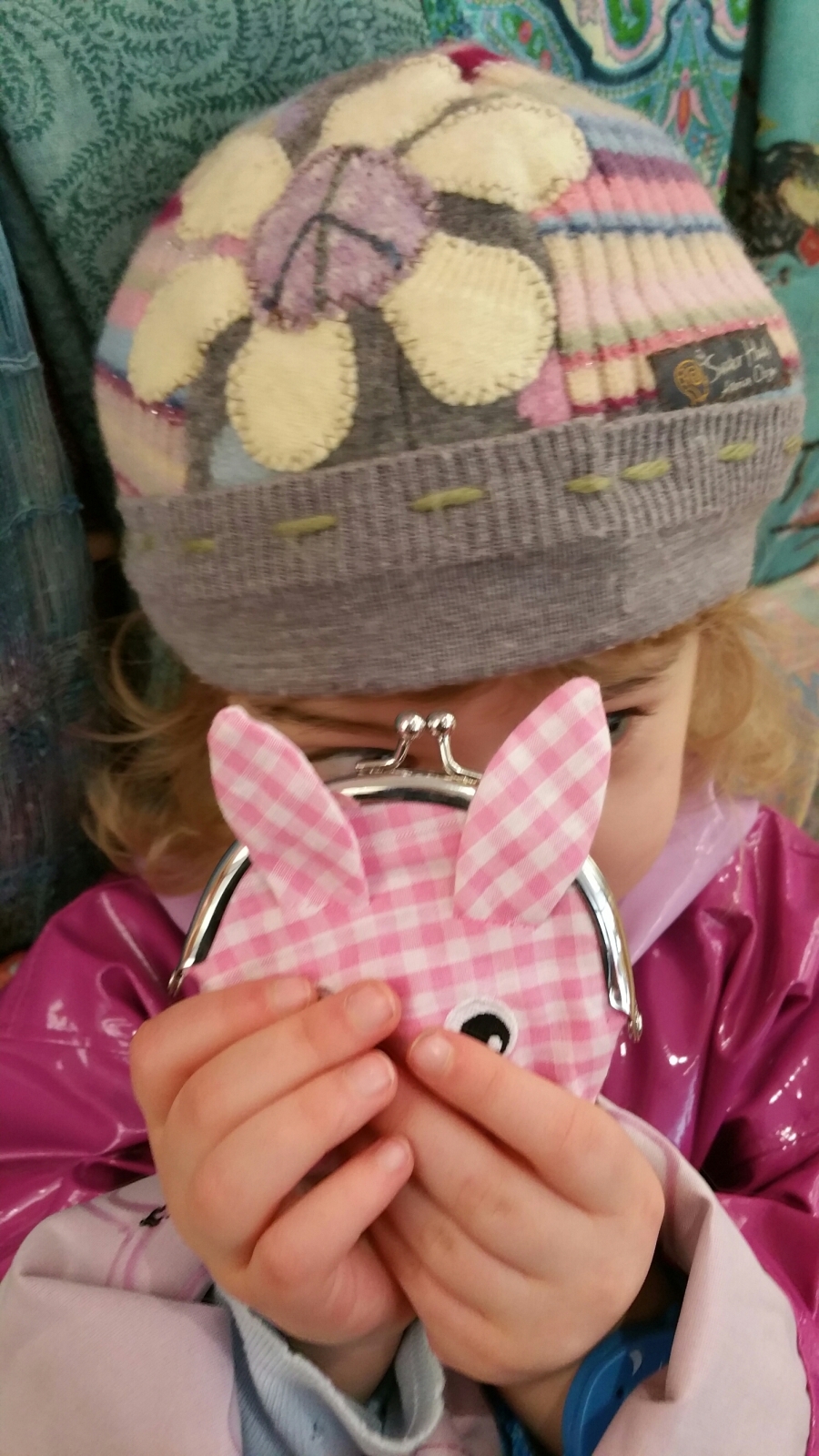 I asked if she was ready for lunch and we were off. The one hitch was the intoxicated homeless man just outside the exit. He was screaming obscenities alla-Bad Santa and being chased by security. Nora was unphased. She giggled and said, “They’re playing!” I pointed out the sculptures to distract her and she pet the dog. 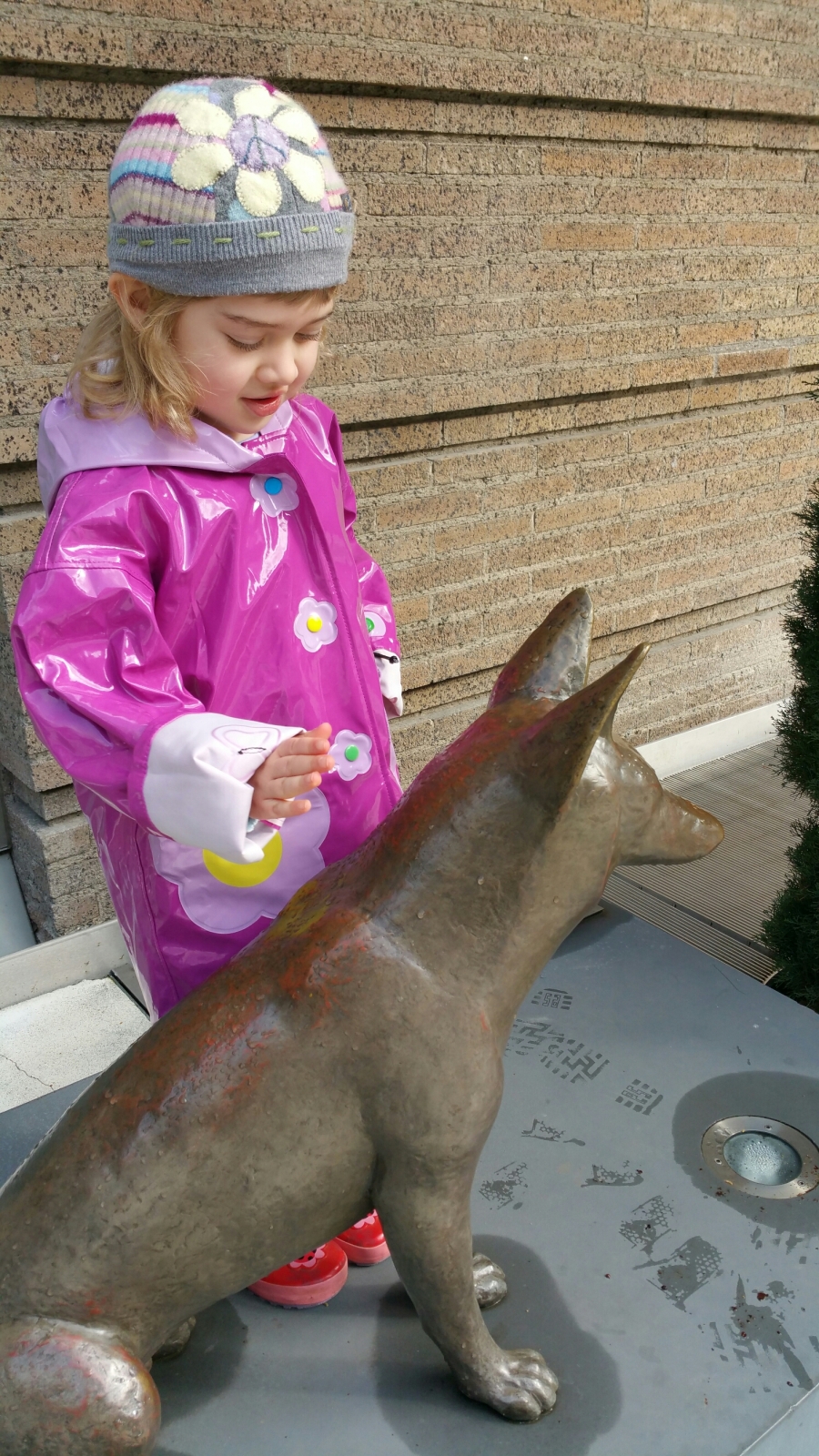 “Where’s his mama?” The words from my mother echoed in my mind as I watched them carry the man away.

I took Nora’s hand and we crossed back towards the park. The police were rousing people from sleeping on the pavement and rotten wood benches. They were stern yet polite but there’s nothing kind about sleeping on stone in the cold and awoken by a stranger.

“They can’t sleep outside, mama! They’re gonna get squished.” It stopped me for a moment, she looked up at me and smiled, she was right. I was tempted to give up the walk through the park to avoid the scene but it was one that was throughout the city and couldn’t be avoided. I explained that they didn’t have homes, that they didn’t have beds to sleep in. As we passed their huddled shapes, she mumbled, “I’m sorry.” To every huddled shape along our way.

We headed towards the theatre district and we stopped to watch an attendant change the sign. 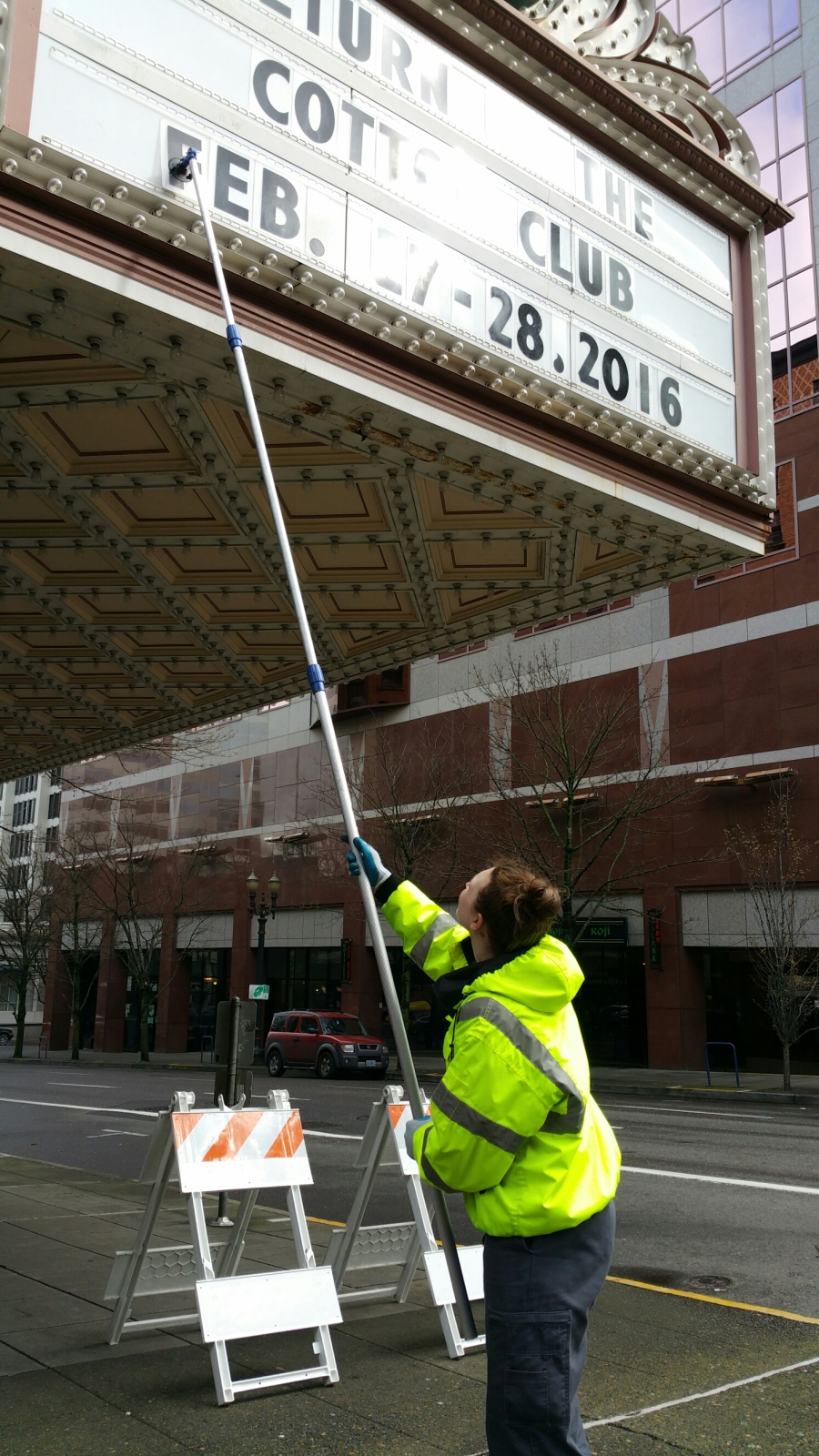 A homeless man yelled at us for blocking his progress with his grocery cart. I tried not to laugh as he stuck out his tongue at us, she was incensed, we moved on.

The Heathman didn’t impress her, not at first.

“Yeah, the room is pretty… Is the food coming?” We had just put in our order. It was 11:40am, tea is served at noon, our order took only 15 min to arrive. She was eating cough drops out of my purse already.

Two women and their daughters entered and were seated behind me in Nora’s view. She paused from playing with the jelly jars and looked downcast.

I asked what was wrong, “Do we have friends coming?”

Immediately I understood my mistake, her conflicting emotions of appreciation and excitement out shadowed suddenly by disappointment, and my own feelings as well. Irrational anger over her ingratitude, my gratitude for her ignorance over her privelege that would only be understood with age and comparison to others, crushing guilt over not taking into account her possible reaction to not including others. It was petulant of me but I felt as if I wasn’t enough for her. A fear I have often and to feel that way at the moment filled me with failure.

Before I ever had her, I had hoped for this day and to share these sorts of events with my own child. Nora was my dream come true but, like many fantasies, reality was a humbling chaos of emotion. This was to be the beginning event of celebrating her coming fifth birthday but I think it was also my farewell to past dreams. I watched her drink her hot cider and steered the conversation to school and her birthday.

The server tucked a pillow behind her to help her steady herself in the chair just before serving. She offered to take our picture before the food arrived and Nora was annoyed at the delay in eating.

(The best of four tries is above.) It frustrated me how there weren’t any good pictures of us together and the rare time someone offered she pulled a face in them.

We sat in silence once the food was served, consumed with devouring the intimidating pile of food, and took in the room. 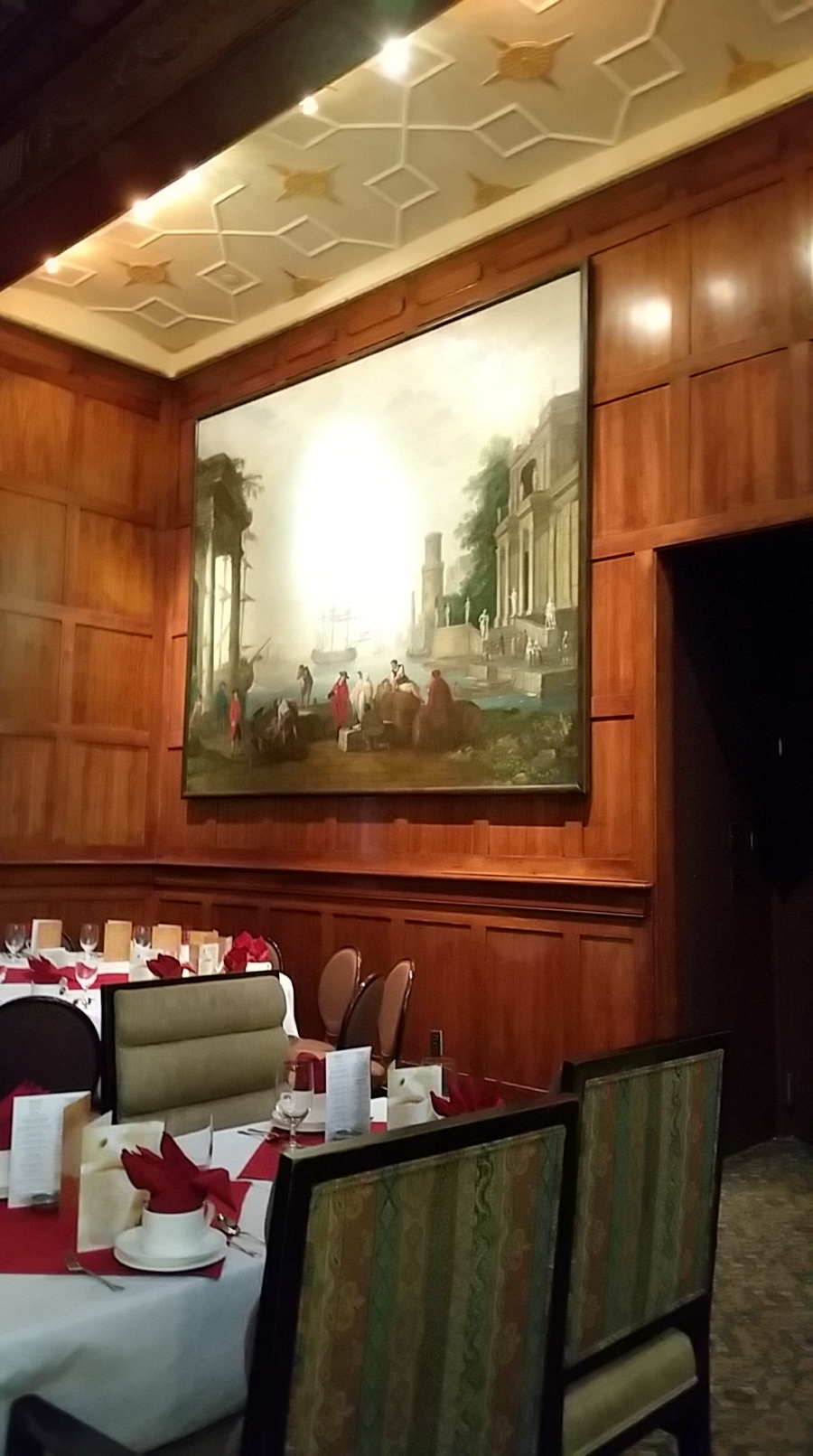 I asked her what her favorite part of the day was, “The cookies.”