Owen’s ears smell like toe jam, his neck roll circles his entire head and smells like soured milk, and his nether regions are like a cornucopia of smells I’ve only encountered on mass transit. Luckily he loves taking baths, doesn’t mind the daily q-tip swabbing of his rolls, and likes his baby bidet from a squeeze bottle to clean his wrinkly elephant balls. He giggles his dry hacking old man cackley-coo when the lavendar water tickles him.

Teething has upped his sweatiness so he’s damp from head to toe which has added to the general funk quotient. No one believes our claims of his sweatiness until they notice his feet are wet and dripping. We’ve given up on keeping him fully clothed to stave off the fussiness from being overheated and have become pros at propping bottles for him to soothe his mouth. My body struggles to keep up with his appetite since he only wants to nurse while he sleeps and only will go to sleep if he’s nursing. I’m either engorged or completely tapped out depending on the time of day. My boobs are symbolic of my emotions as of late.

The reality is this, he’s an easy baby. Babies are always hard and parenting is never easy but, in the grand scheme of things, he’s easy. In the words of The Dead Milkmen, “You really stink – but I love you,”

Nora mimics his breathing by panting as a dog and barks at him thinking he’s in on the joke when her barking itself elicits a laugh from him. He thinks everything she does is magic. I love the open admiration in his eyes for her and the irresistible pull he has on her. For a three-year-old to be so patient and loving towards an infant is a marvel. For her to find his snoring, farting, and constant jabbering endearing is phenomenal. They wait for each other and nap at 1:30 together despite preschool, doctor appointments, road construction, neighbor noise, etc. They love to nap together. 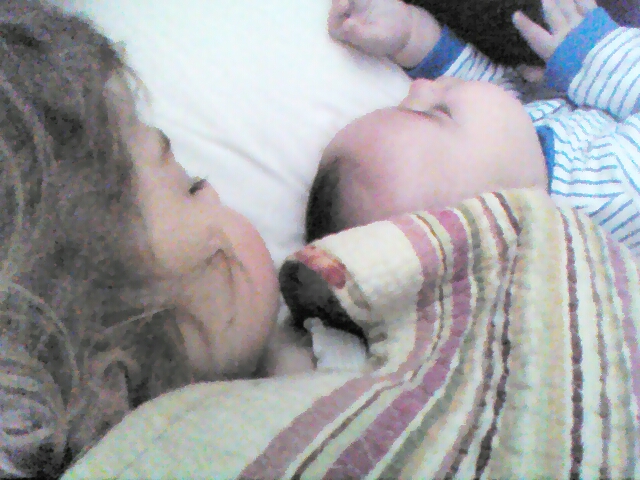 His naturally sprouted mohawk and kung fu mullet make for a very unintentional hipster look which makes him all the more fitting as a Portlander. Or as Nora says, “Be quiet, brudda’. Be quiet, baby. You silly (giggling)… You smell.”

Posted from WordPress for Android