One of the advantages of autism is that the person can have unwavering focus on desired topics or activities. This is advantageous in a work setting as long as that focus is productive because you’re able to work even longer than others but the danger of course is that you put that project before your own need for food or rest. Such can be the focus that my husband has at times and we’ve learned ways to manage this. I say “we” because it takes just that. A combined effort of him placing reminders on his phone, email and the occasional reminder from his loving wife via text, email, and Messenger. Excessive? At times, it feels that way but oddly enough he appreciates it when I do so because he might forget to go to an appointment or even come home.

Yet there are other situations where this becomes an issue in regards to parenting. It can be problematic if not comical when they get busy riding bikes and dad forgets to have them stop for a break and Owen falls asleep at the wheel of his tricycle or they’re so into playing video games together that they forget to eat. So when house projects come up and Papa wants to include the kids there’s normally a certain amount of calamity that ensues. The other day was no different.

I heard power tools and a mention of a “ladder” and decided I better go outside to investigate. He had the good intention of trimming the laurelwood hedge and had enlisted Leonora to pull weeds while he was up on the ladder. He was at a safe distance and initially nothing was amiss until I noticed the cord for the trimmer was wound up in a spiral underneath Owen’s feet and he was jumping back and forth between the stumps over the cord.

I explained that their dad was on a ladder with a power tool and they needed to give him space. After much protest, I explained we were going inside for lunch to give their dad a chance to work on the hedge.

Yet just before we started to head in there was a gasp from Leonora.
“Papa! That’s the nest!!”

There was a long pause and a humored, “Uh-oh…”

We all spied at what she was pointing at and noticed an angry looking robin staring at us from her now unobstructed view of our house from her nest. Jamie had sheared off the layer of laurelwood that was hiding her home from predators.

Jamie climbed down the ladder and started yelping in pain as Leonora began whacking at him for his miscalculation. We all began laughing and Jamie sheepishly apologized, “I’m sorry, Mama bird.”

If he thought this was the end of our daughter’s ire, he was sadly mistaken. Throughout the next few weeks she kept close tabs on the mama bird and her scavenging for food and debris to rebuild her nest.

As Father’s Day neared, I reminded her that we should make a card. She looked frustrated for a moment and then laughed, “Ok…” I didn’t think much of it and helped set out art supplies so she could get started.

Remember that focus? Our daughter had not forgotten about the nest and in her penchant for humor managed to include it in the card. 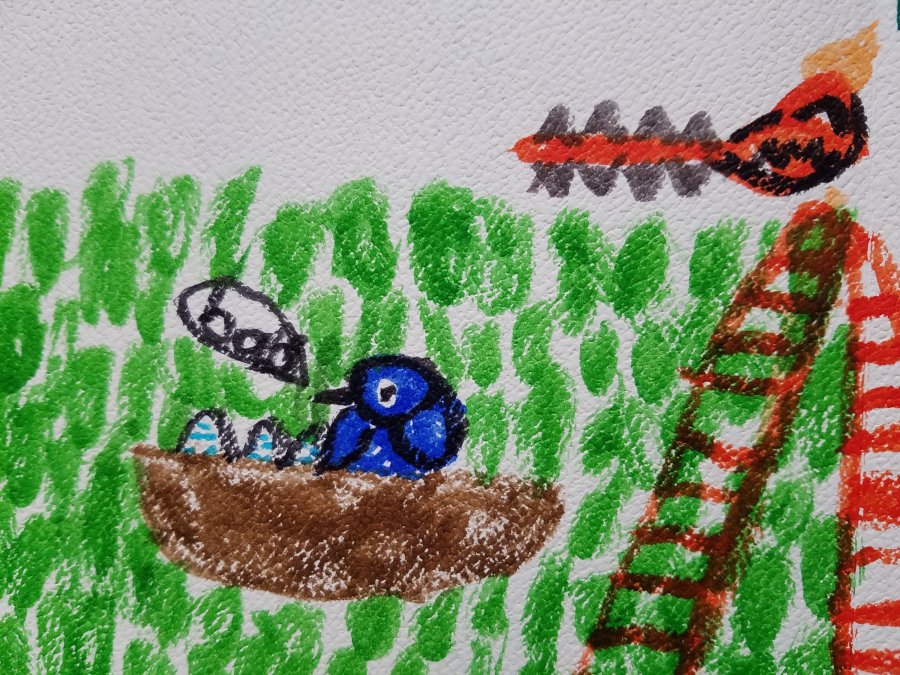 Just in case there’s any confusion, you are not mistaken that the caption bubble from the bird reads, “Bad.” The power tool is included to indicate the cause of the bird’s apprehension alongside the loving note to her father. 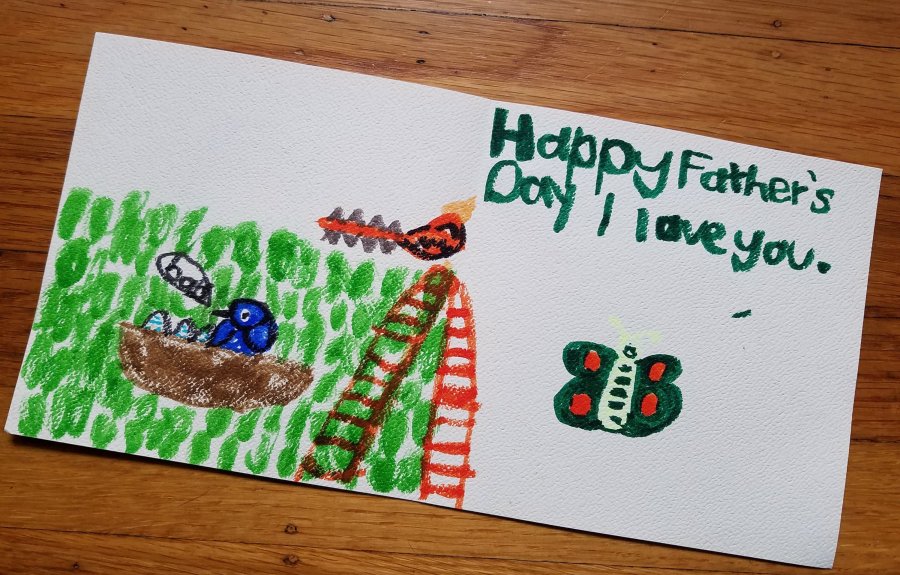 When we asked her if she had forgiven her father she quietly commented to me, “I have…but not the mama bird. She’s going to poop on him!”