The doorbell rings for a package and Owen checks to make sure it’s the postal carrier he likes. It is, I breathe a sigh of relief that Owen won’t be stripping in anger, and I greet Dave as I open the door. He says hello to Owen, “Hey, buddy, good job keeping your clothes on.”

Owen laughs, bounces on his horse, and replies, “COCK!” 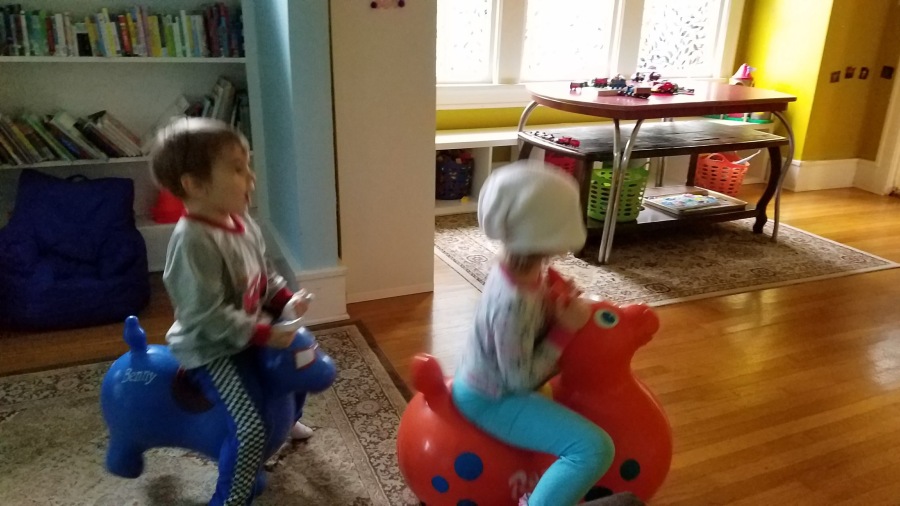 Owen has mastered the Rody bouncing horse thanks to his sister. He mimics her and rides one arm free, trying to say “yeehaw!” like her, saying “yee-yah!” instead, both laughing and smiling. I wasn’t sure I would ever see them play together like this. There’s moments I cry in gratitude at the sight of them, at the boundless kindness of Nora, and she normally runs to get me a tissue at those moments, “Mama, are you having a sad moment?” I laugh when she asks me this and thank her but I also cry out of exhaustion and relief.
Our nonverbal son is beginning to speak. It’s taken three years of hard work for us both and we’re seeing progress. He’s calling me “mama”, he’s asking for us, but most important is that he’s SPEAKING to US. He’s using words instead of his internal language, his jargon, and letting us into his world. We’re told as parents to accept our children and embrace what’s unique about them, and we do, but what are you to do when they reject you?

It’s one of the many things about autism that they don’t tell parents about, and parents don’t discuss it out of shame at the truth and the feelings from it, and “it” is the rejection. Having your child shut you out, not acknowledge you, shun your affection, to refuse to call you “mom”. “It” is why I cry when I see him let his sister into his world and want to be in hers. Why I stop anything I’m doing to return his hug, his kiss, his laugh. Why I cry when he wants to stare into my eyes. If only for a moment.

“It” is why I return his request for a kiss even when I’m cleaning poop off of him. Why I cry when I hear him say “mama”. Why we don’t correct him when he tries to say “quack” when he rides his horse and says “cock” instead. Why I don’t get mad or correct him when he shouts, what he thinks is “duck”, when we feed the “#%&!”s.

There’s many milestones others expect of him but I love the ones that Owen creates for himself even when they’re maddening. He’s mastered puzzles, shares his cars now for crash derbeys, and has shown interest in other kids. But I think I’ll always think of this phase fondly as the one where I discovered ducks say “cock”.